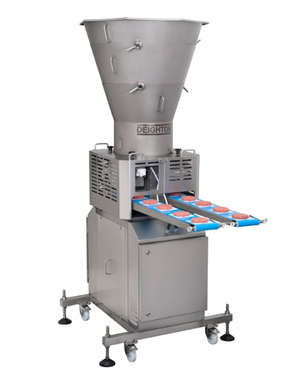 Using the 180° technology developed by Deighton the D12000 can produce up to 12,000 burger patties per hour and with a triple form drum up to 36,000 nuggets portions per hour.

The D12000 is supplied as standard with an automatic wire cleaning system, and chilling system. Running at 3000 RPH the machine produces 4 patties – set of forms per revolution.

Because of the 180 technology developed by Deighton the structure of the product remains more consistent because the hopper is emptied 4 times faster than any conventional rotary forming system.